Here you can find some of my past, future and current projects on AI and ML. They are all well organised in cards and as they are completed, I'll try to fill (hopefully) them with all information 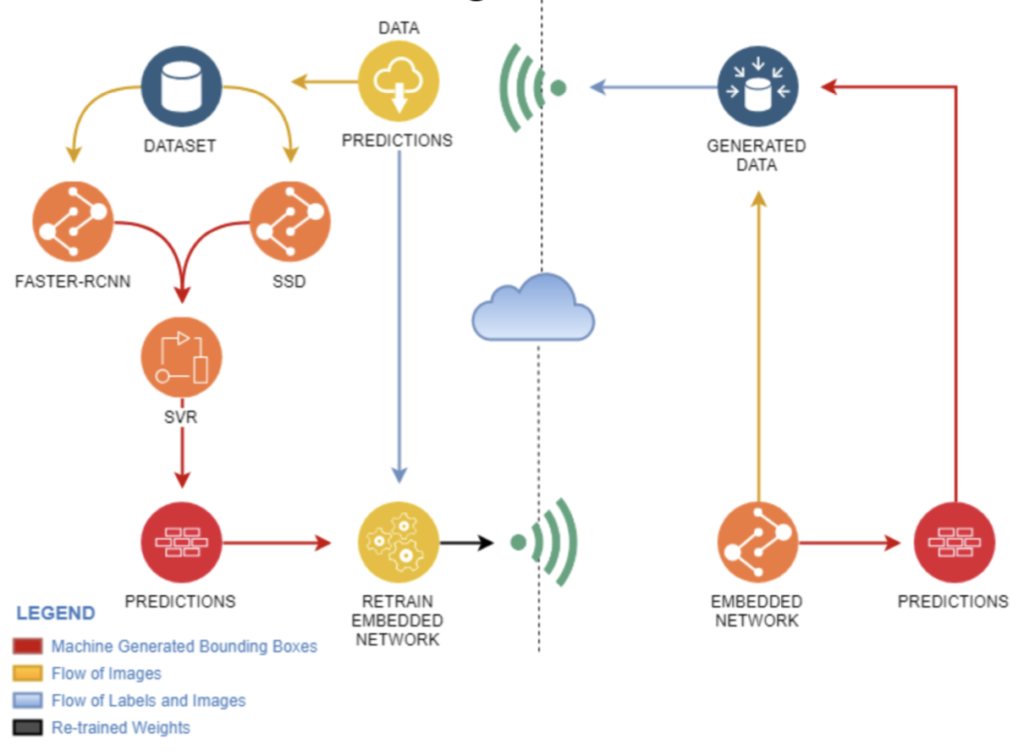 Training object class detectors typically requires large amount of data in which images are manually annotated with bounding boxes (bbox) for every instance of each class. This is particularly true for lightweight object class detectors that progressively improve their mean average precision (mAP) increasing the number of examples available. The presented research suggests a methodology to exploit generated data from the field and a collaboration with multiple independent deep neural networks to obtain an increasingly more performing embedded model for the designated tasks. 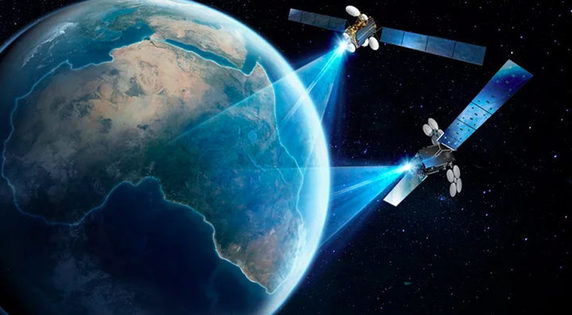 Understanding the use of current land cover, along with monitoring change over time, is vital for agronomists and agricultural agencies responsible for land management. The increasing spatial and temporal resolution of globally available satellite images, such as provided by Sentinel-2, creates new possibilities for researchers to use freely available multi-spectral optical images, with decametric spatial resolution and more frequent revisits for remote sensing applications such as land cover and crop classification (LC&CC), agricultural monitoring and management, environment monitoring. Existing solutions dedicated to cropland mapping can be categorized based on per-pixel based and object-based. However, it is still challenging when more classes of agricultural crops are considered at a massive scale. In this paper, a novel and optimal deep learning model for pixel-based LC&CC is developed and implemented based on Recurrent Neural Networks (RNN) in combination with Convolutional Neural Networks (CNN) using multi-temporal sentinel-2 imagery of central north part of Italy, which has diverse agricultural system dominated by economic crop types. The proposed methodology is capable of automated feature extraction by learning time correlation of multiple images, which reduces manual feature engineering and modeling crop phenological stages. Fifteen classes, including major agricultural crops, were considered in this study. We also tested other widely used traditional machine learning algorithms for comparison such as support vector machine SVM, random forest (RF), Kernal SVM, and gradient boosting machine, also called XGBoost. The overall accuracy achieved by our proposed Pixel R-CNN was 96.5%, which showed considerable improvements in comparison with existing mainstream methods. This study showed that Pixel R-CNN based model offers a highly accurate way to assess and employ time-series data for multi-temporal classification tasks. 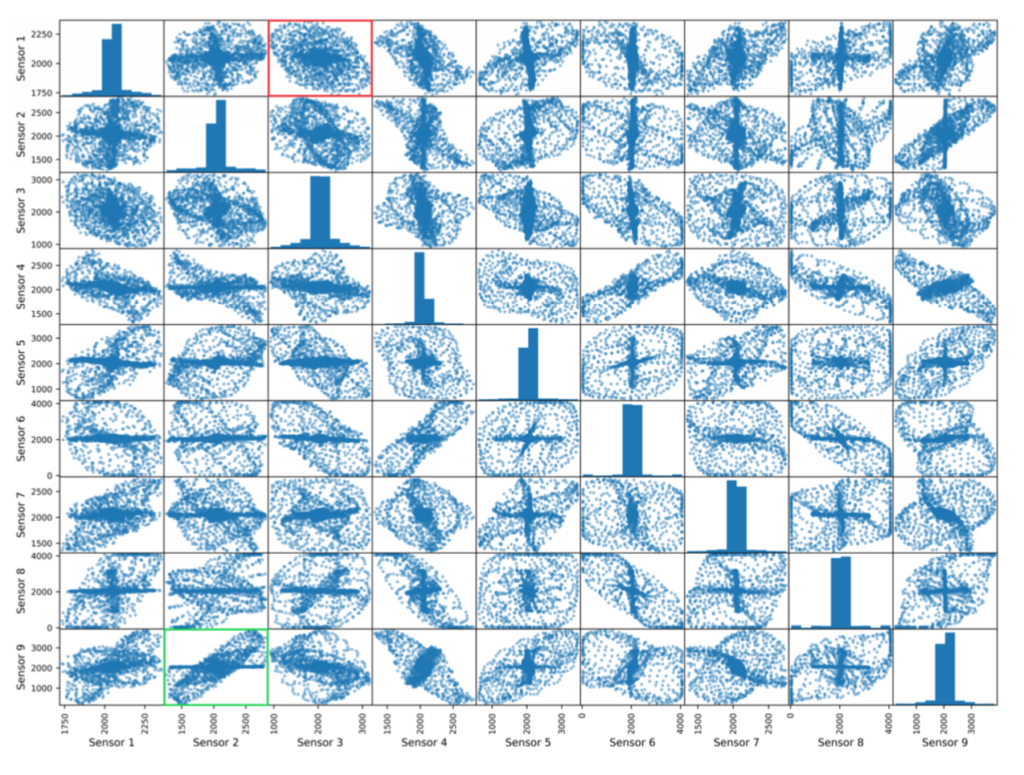 Nowadays, applications of ultrasonic proximity sensors are limited to a post-processing of the acquired signals with a pipeline of filters and threshold comparators. This article proposes two different and novel processing methodologies, based on machine learning algorithms, that outperform classical approaches. Indeed, noisy signals and presence of thin or soundproofing objects are likely sources of false positive detections that can make traditional approaches useless and unreliable. In order to take advantage of correlations among the data, multiple parallel signals, coming from a cluster of ultrasonic sensors, have been exploited, producing a number of different features that allowed to achieve more accurate and precise predictions for object detection. Firstly, model-based learning as well as instance-based learning systems have been investigated for an independent time correlation analysis of the different signals. Particular attention has been given to the training and testing of the deep fully connected network that showed, since the beginning, more promising results. In the second part, a recurrent neural network, based on long short term memory cells, has been devised. As a result of its intrinsic nature, time correlations between successive samples are not more overlooked, further improving the overall prediction capability of the system. Finally, cutting edge training methodologies and strategies to find the different hyperparameters have been adopted in order to obtain the best results and performance from the available data. 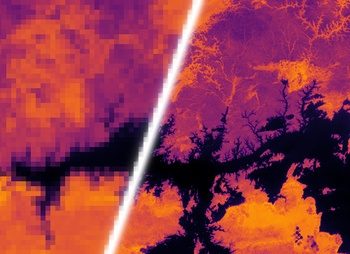 The goal of this research is to construct high-resolution images fusing multiple images at low resolution of the same scene. Look for PIC4SeR in the leaderboard 😉 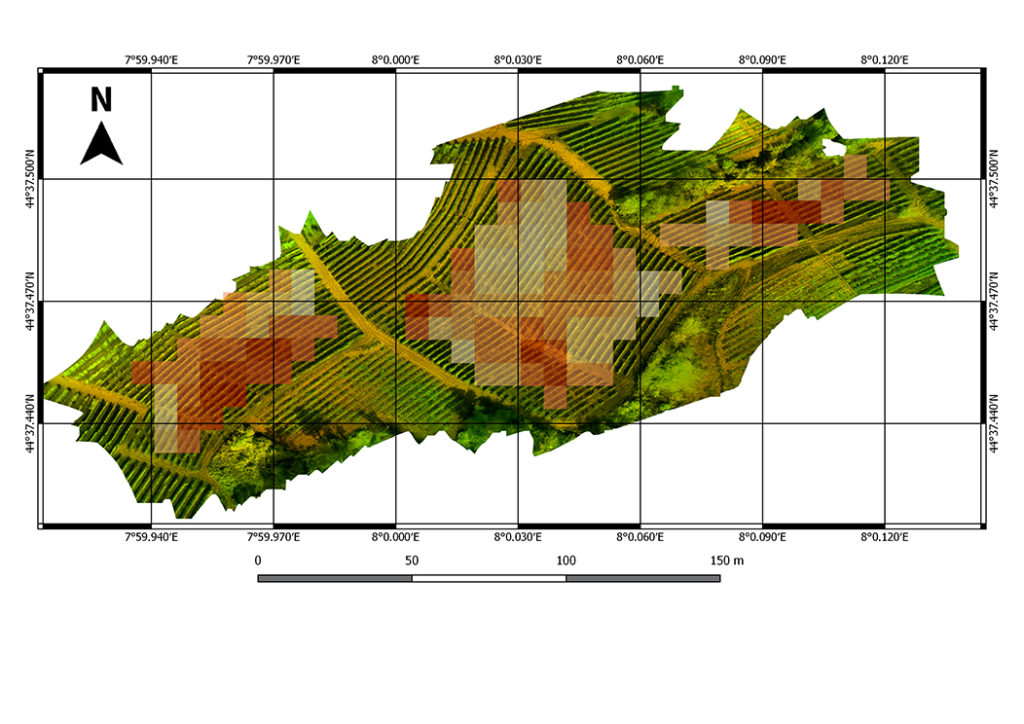 Frequent vegetation monitoring of agriculture crops during their phenological cycle helps farmers/agronomist to perform their activities in efficient way to gain maximum yield and reduce the environmental noise caused by excessive use of chemicals. Various remote sensing platforms equipped with optical multispectral sensors such as satellite, airborne and unmanned air vehicles (UAVs) are being used in vegetation monitoring. Satellites equipped with multispectral sensors are popular due to their large coverage and temporal resolution. On the other hand, UAVs are preferred where more detailed imagery is needed while its expensive and time consuming if more frequent campaigns have to be performed. In this study, vineyard site is considered to assess the reliability of using satellite images for vegetation monitoring. Indeed, satellite imagery with decametric spatial resolution cannot describe the vegetation status at vine rows level due to the mixed nature of pixel, representing the cumulative effect of inter row terrain and vine rows. Therefore, a pixel refinement is needed to minimize this effect. In this work, a convolutional neural network (CNN) based approach is proposed to gain benefits from high resolution UAV images in order to refine the frequent moderate resolution satellite images over a vineyard. 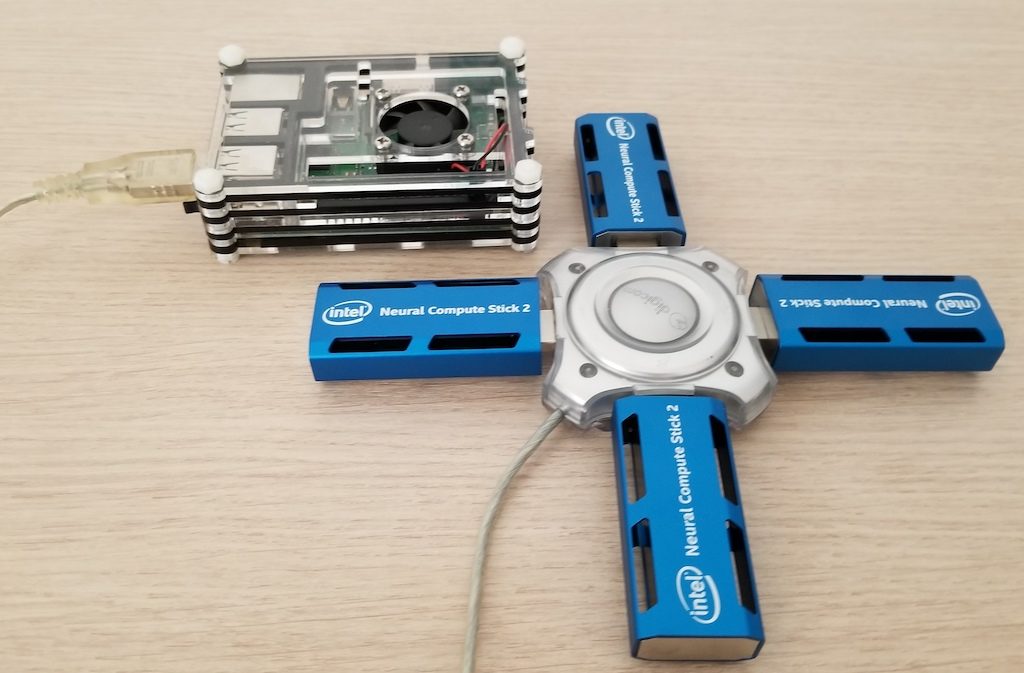 Real-time apple detection in orchards is one of the most effective ways of estimating apple yields, which helps in managing apple supplies more effectively. Traditional detection methods used highly computational machine learning algorithms with intensive hardware set up, which are not suitable for infield real-time apple detection due to their weight and power constraints. In this study, a real-time embedded solution inspired from “Edge AI” is proposed for apple detection with the implementation of YOLOv3-tiny algorithm on various embedded platforms such as Raspberry Pi 3 B+ in combination with Intel Movidius Neural Computing Stick (NCS), Nvidia’s Jetson Nano and Jetson AGX Xavier. Data set for training were compiled using acquired images during field survey of apple orchard situated in the north region of Italy, and images used for testing were taken from widely used google data set by filtering out the images containing apples in different scenes to ensure the robustness of the algorithm. The proposed study adapts YOLOv3-tiny architecture to detect small objects. It shows the feasibility of deployment of the customized model on cheap and power-efficient embedded hardware without compromising mean average detection accuracy (83.64%) and achieved frame rate up to 30 fps even for the difficult scenarios such as overlapping apples, complex background, less exposure of apple due to leaves and branches. Furthermore, the proposed embedded solution can be deployed on the unmanned ground vehicles to detect, count, and measure the size of the apples in real-time to help the farmers and agronomists in their decision making and management skills. 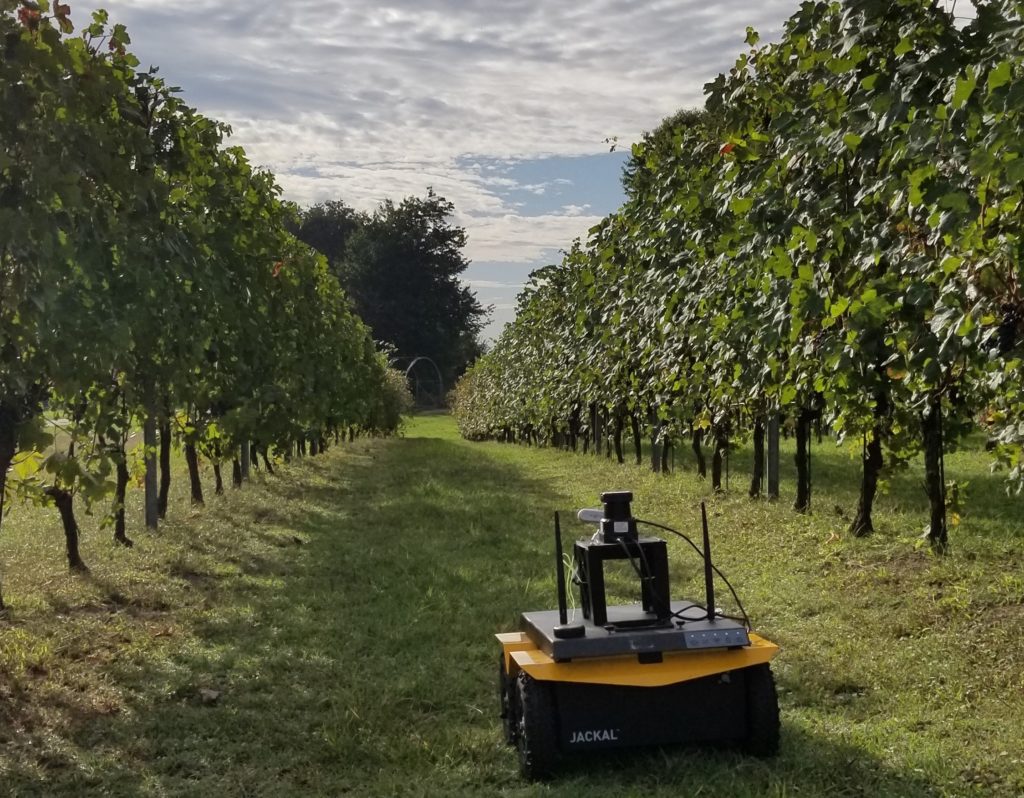 Autonomous Navigation in Vineyards with Mono-Camera

With the rapid growth of the world population over the past years, the agriculture industry is asked to respond properly to the exponential augmentation of global demand for food production. In the past few years, autonomous agricultural field machines have been gaining significant attention from farmers and industries in order to reduce costs, human workload, and required resources. Nevertheless, achieving sufficient autonomous navigation capabilities requires the simultaneous cooperation of different processes; localization, mapping, and path planning are just some of the steps that aim at providing to the machine the right set of skills to operate in semi-structured and unstructured environments. In this context, the presented research exploits later advancement in deep learning and edge computing technologies to provide a robust and fully integrable local planner for autonomous navigation along vineyards rows. Moreover, the devised and tested platform necessitates only of low range and low-cost hardware with minimal power and bandwidth requirements. The machine learning algorithm has been trained and tested with acquired images during different field surveys in the north region of Italy. Then, after performing an optimization process, the overall system has been validated with a customized robot platform in the appropriate environment. 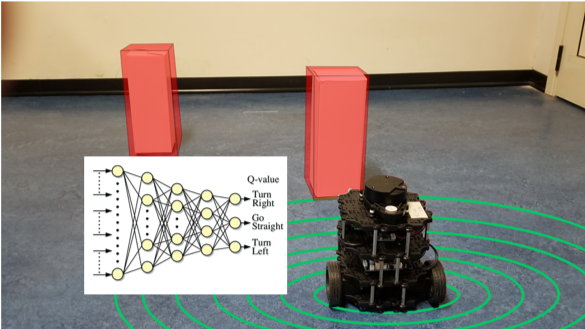 Autonomous Navigation with Deep Reinforcement Learning at the Edge

Train a UGV to autonomously navigate in an indoor and unstructured environment with moving obstacles. All computations and inferences are performed on board. 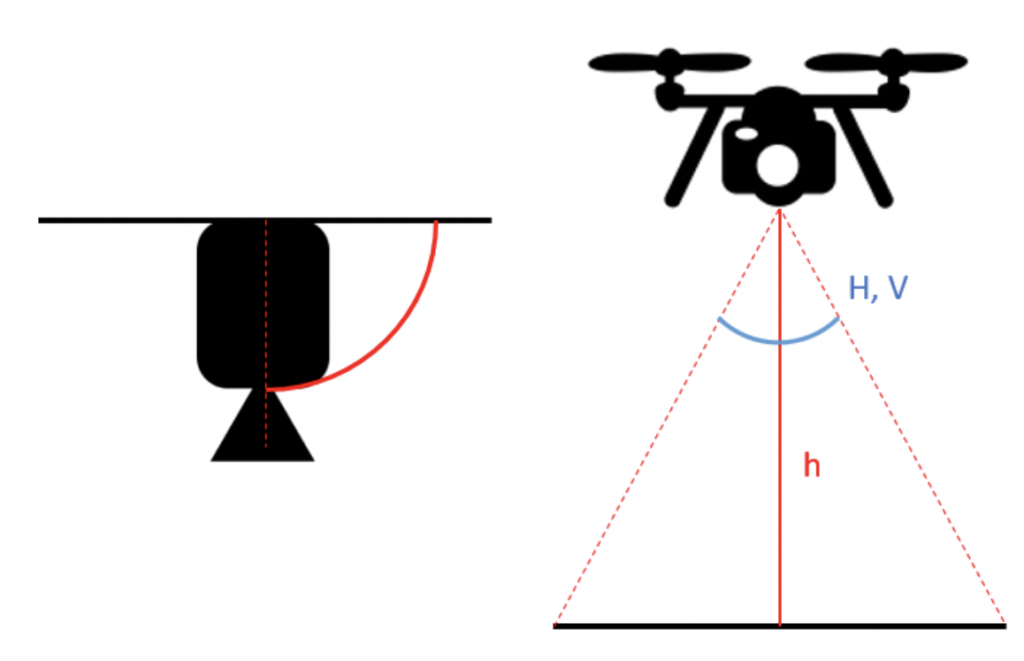 Object Detection (OD) has been radically changed and improved in the past
few years by Deep Learning (DL) branch. As other computer vision tasks, such as image
classification, instance segmentation, face recognition, OD has achieved results never seen before
and it has started to become an useful tool for practical applications. This brief research aim
at assessing the potentiality of latest improvements in the field of OD with a real study case
brought by an Italian company request. More in detail, the presented study experiments a deep
learning algorithm, to recognize automatically unmanned ground vehicles (UGVs) in video
streams taken by unmanned aerial vehicles (UAVs). DL architectures are a very powerful tools
but, they also require huge amount of data and computational power. In order to speed up the
training process Amazon AWS EC2 P3 instance with NVIDIA Tesla v100 has been largely used.
Multiple general purpose graphic processing units (GP-GPUs) have been exploited in order to
parallelize and cut wall time down of the training process. 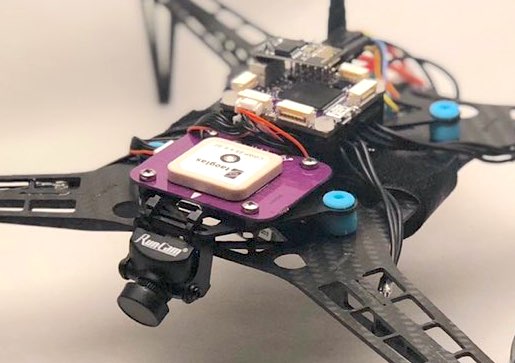 Single image super-resolution (SISR) can be useful to different domains and field of application. We concentrate our research to make these algorithms light-weight and computationally efficient to embedded systems and low-power devices. 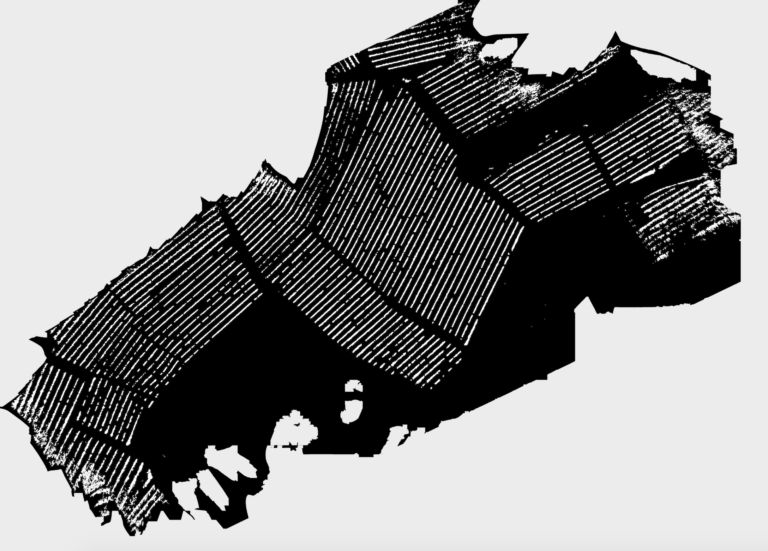 Develop with deep learning an end-to-end framework to generate an optimal path for a UGV automatically. 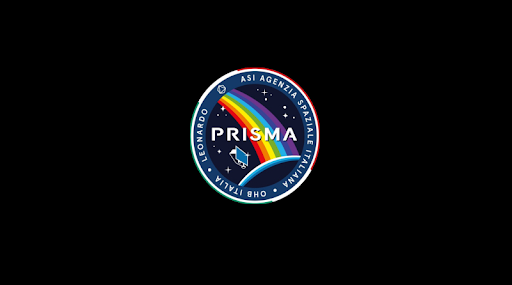 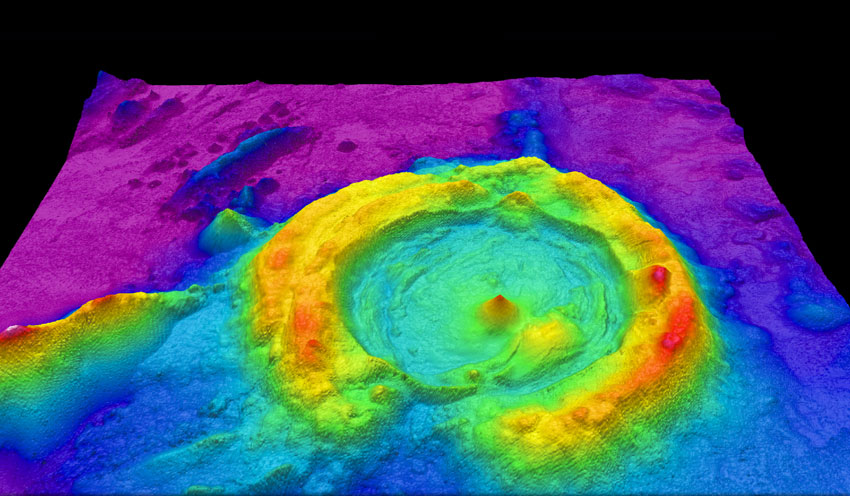